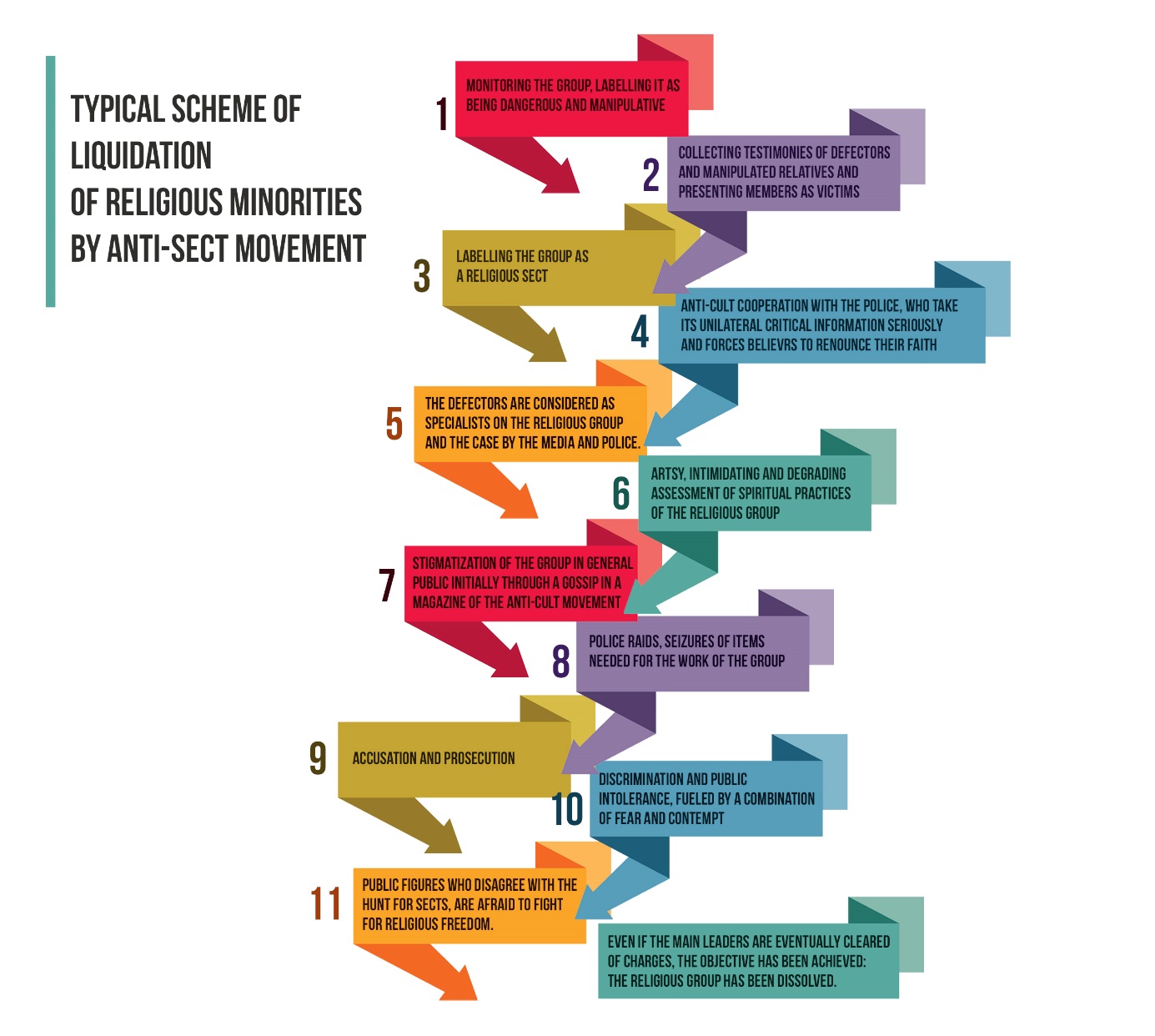 This formula is repeated again and again in many cases all over the world and also in the Czech Republic. (Specific examples of persecuted groups and individuals can be found here.

1. Monitoring the work of the group, its “labelling” as dangerous and manipulative

In CZ, the main representative of the anti-cult movement is the Society for the Study of Sects and new Religious Movements (SSS&NRM), which is a civic association bringing together several Christian clergymen which has a virtual monopoly on cooperation with the police and courts in the field in question. You can read more about the SSS&NRM here.

2. Collection of statements by relatives who disagree and dissenters who have dropped out, presentation of members are victims

3. Labelling of the group as a demonic sect

In the media, members of the anti-cult movement create strong negative pressure in society with their critical statements against the group. The group is presented by them as manipulative and sectarian.

If however the same criticism was raised against established churches, it would be labelled as an expression of anti-Semitism or Islamophobia.

4. Cooperation between the anti-cult movement and the police, which takes their one-sided critical information seriously and forces members to give up their faith

See – the website of the Ministry of the Interior states exclusive cooperation with the SSS&NRM in the field of religious minorities (appraisals, training,…).

5. Dissenters who have dropped out are regarded as specialists who provide malicious gossip about the group to the public

6. Biased assessment on the basis of spiritual practices which the majority of people do not understand

7. Stigmatisation of the group in the eyes of the public, initially via malicious gossip in the magazine of the anti-cult movement

Doc. Zdeněk Vojtíšek, spokesman for the SSS&NRM, publishes in his magazine Dingir as well as in public printed and electronic media.

Topics such as drugs, sex or finances – usually tax avoidance – are often used as a pretext for criminalisation of religious societies.

9. Police raids, confiscation of items needed for the further activity of the group

10. Discrimination and public hatred caused by a combination of fear and contempt

On the basis of a negative campaign, people are scared of being in contact with the group to avoid encountering problems (in life, relationships, society and their careers). This prevents not only practising of the faith, but also its spread.

11. Public figures who disagree with the witch-hunt against sects don’t want to fight for religious freedom. They are afraid that they will be suspected of sympathising with a minority.

Although senators and morally strong personalities express their support during meetings in person with the group, they do not back them publicly to avoid exposure to media or political suicide due to a negative image in the media.

12. A trial which takes as long as necessary for the funds of those believers who remain and who were not dispersed by the staged campaign to run dry.

Are you a victim of religious persecution?

Soteria International reported on religious discrimination in CZ and infringement of freedom of religion on 30.9.2015 at the congress of the OSCE (Organisation for Security and Cooperation in Europe) to representatives of 57 countries at the Human Dimension Implementation Meeting 2015.

It recommended that CZ adopt the following corrective measures:

– Each use of the word “sect” must be regarded as religious discrimination which must be suppressed by the respective authorities.